Ok, so my good friend Cass was in town, visiting from New Orleans yesterday and wanted very badly to go to the Stax Museum of American Soul Music, and I was more than happy to oblige, as it’s one helluva a place.  She brought her friend Daron along and the three of us set out for good times.  First stop, Gus’s World Famous Fried Chicken.  Daron commented on the fact that they added an apostrophe “s” at the end of the name and we all got a good laugh outta that.  But the food, service and atmosphere were as stellar as the fried green tomatoes and we couldn’t have been more full after that meal.  In fact, there was a moment when we considered not visiting the museum and just going home to take naps.  Yeah, it’s that good.  If you’re ever here visiting, go there.  It’s worth it.

About an hour later, we’re parking the car and walking through the back lot and into the front door of this sacred ground that is Stax and I’m excited because I’ve been here before but they haven’t and I know what they’re in for as newcomers.  The clerk at the front counter asks us where we’re from and we tell him that Cass and Daron are from Nola and that I’m local.  He smiles and tells them that their admission is $12.00 each, but that mine is free and I ask, “huh?”, and he tells me that locals get in for free on Tuesdays.  Cha-ching!  This day is getting better. 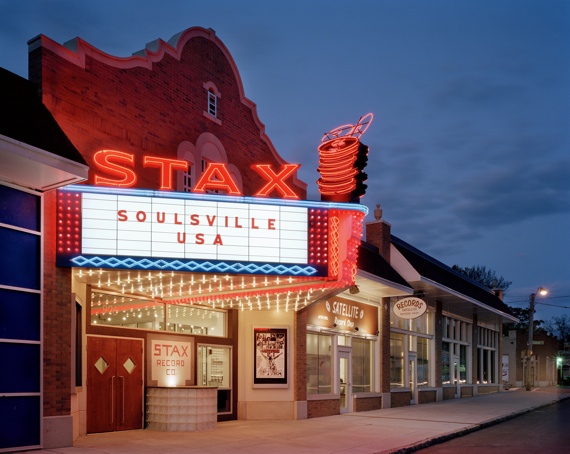 There’s a 20-minute film that starts the tour off that gives you the entire story in brief.  It’s heavy and if you’ve never been to this museum before, let me first warn you that it’s an emotional place and that you may wanna bring along a handkerchief or some tissues.  I definitely got some use outta my bandanna and I’m glad it was in my back pocket.  The story is so compelling and I tear up every time.  Cass and Daron were both feeling it too.  But there’s a lot to be happy about there too, like seeing Al Jackson’s Rogers drum set, or Duck Dunn’s bass, or all of the recording gear that’s lining the walls.  Hearing Otis Redding’s voice in the main room, as he booms over the speakers in the studio outtakes that play continuously.  Simply fantastic.  Hundreds of recordings, memorabilia, old stage clothing, videos, Isaac Hayes’ gold plated Cadillac.  Damn!  We were having a ball.

Anyhow, fast forward about 90 minutes and we’re nearing the end, when all of a sudden Daron quickly comes walking over to me and says, “Dude, there’s a giant Elvis exhibit in the next room!”  WTF?  Seriously?  Wow.  And sure enough, he was telling the truth because I turned the corner and staring me in the face was an entire two-room exhibit of huge, framed black and white photos of the King of Rock.  I was floored.  Daron looks at me and is wondering what the hell Elvis has to do with Stax Records and since we were at the end of the tour, we just went straight up to the folks at the counter in the front lobby and asked them.  They informed us that, “Well, Elvis did record here once”, which I did not know and was super surprised to learn, and that the last exhibit in the museum has been rotating with different shows every month.  This month just happened to be the King’s turn.  Daron actually told the lady that his feelings were kinda hurt, which I thought was hilarious.  I mean, come on we’re at Stax for cryin out loud, not Graceland.  There’s enough of Elvis everywhere you go in this town, we don’t need to see him at Stax.

Just my two cents.  I love him, don’t get me wrong, but there’s a time and a place.

So, we head home and my friends are somewhat in a funk now and I am feeling kinda puzzled at the whole thing.  Here we are having a great time looking at all of this stuff and reading about these peoples lives in this wonderful world of soul, then the very last thing we see is something that seems so out of place.  I dropped my friends off at their hotel and headed out to my casino gig with my head down, wondering what was going on, then decided that I needed to find out, so when I got home I jumped on my computer and looked it up and sure enough the lady was telling the truth.  Elvis DID record there, twice in 1973.  Holy crap, and the Beatles were scheduled to be here right before him, but canceled the session due to the fact that the news of them coming to Memphis had created such pandemonium that their management decided it was a bad idea.  Who knew?  I did a Google search and found an interview where Steve Cropper said, “Taxman would have been Staxman”.  Memphis would have been forever changed if that had happened, but we still got the King.

I guess this means I gotta go in search of these mysterious Elvis Stax sessions now.